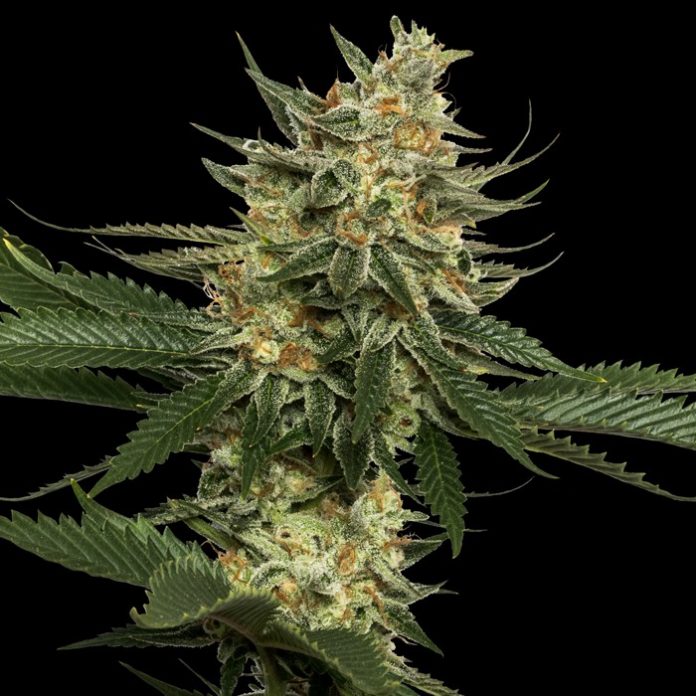 Cannabis sativa is an annual herbaceous flowering plant indigenous to eastern Asia but now of cosmopolitan distribution due to cultivation.[1] It is placed in the Cannabis genus which belongs to a small but diverse family the Cannabaceae. It has been cultivated throughout recorded history, used as a source of industrial fibre, seed oil, food, recreation, religious and spiritual moods and medicine. Each part of the plant is harvested differently, depending on the purpose of its use. The species was first classified by Carl Linnaeus in 1753.[2]

The flowers of Cannabis sativa are unisexual and plants are most often either male or female.[3] It is a short-day flowering plant, with staminate (male) plants usually taller and less robust than pistillate (female) plants[4] The flowers of the female plant are arranged in racemes and can produce hundreds of seeds. Male plants shed their pollen and die several weeks prior to seed ripening on the female plants. Although genetic factors dispose a plant to become male or female, environmental factors including the diurnal light cycle can alter sexual expression.[5] Naturally occurring monoecious plants, with both male and female parts, are either sterile or fertile but artificially induced “hermaphrodites” can have fully functional reproductive organs. “Feminized” seed sold by many commercial seed suppliers are derived from artificially “hermaphrodytic” females that lack the male gene, or by treating the plants with hormones or silver thiosulfate. 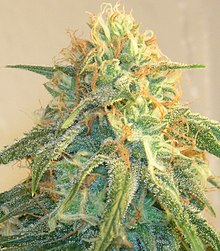 The flower of a hybrid Cannabis indica plant

Although the main psychoactive constituent of Cannabis is tetrahydrocannabinol (THC), the plant is known to contain more than 500 compounds, among them at least 113 cannabinoids; however, most of these “minor” cannabinoids are only produced in trace amounts.[6] Besides THC, another cannabinoid produced in high concentrations by some plants is cannabidiol (CBD), which is not psychoactive but has recently been shown to block the effect of THC in the nervous system.[7] Differences in the chemical composition of Cannabis varieties may produce different effects in humans. Synthetic THC, called dronabinol, does not contain CBD, CBN, or other cannabinoids, which is one reason why its pharmacological effects may differ significantly from those of natural Cannabis preparations.

Beside cannabinoids, Cannabis chemical constituents include about 120 compounds responsible for its characteristic aroma. These are mainly volatile terpenes and sesquiterpenes.

Human intervention has produced variation within the species and some authorities only recognize one species in the genus that has had divergent selective pressure to either produce plants with more fiber or plants with greater THC content.[10] Some studies indicate that, on average, Cannabis sativa has higher levels of CBD compared to THC than C. indica.[11] However, large variability exists within either species, and there is an increasing discussion whether the existing paradigm of the difference between species adequately represents the variability found within the Cannabis genus.[12][13][14] There are five chemotaxonomic types of Cannabis: one with high levels of THC, one which is more fibrous and has higher levels of CBD, one that is an intermediate between the two, another one with high levels of cannabigerol (CBG), and the last one almost without cannabinoids.[15]

Cannabis strains with relatively high CBD:THC ratios are less likely to induce anxiety than vice versa.[16] This may be due to CBD’s antagonistic effects at the cannabinoid receptors, compared to THC’s partial agonist effect.[17] CBD is also a 5-HT1A receptor (serotonin) agonist, which may also contribute to an anxiolytic-content effect.[18] The effects of sativa are well known for its cerebral high, while indica is well known for its sedative effects which some prefer for night time use.[18] Both types are used as medical cannabis. Indica plants are normally shorter and stockier than sativas.[19] They have broader, deeply serrated leaves and a compact and dense flower cluster.